South East of England and London

A seizure is the clinical manifestation of an abnormal and excessive synchronized discharge of a set of cortical neurons in the brain. Epilepsy is the tendency for recurrent seizures.

In Partial seizures the abnormal electrical discharge arises in a focal region of the cortex (figure 1). For example focal motorseizures originate from the motor cortex causing rhythmic movement of the contralateral arm, leg or face. Focal sensory seizures originate from the sensory cortex causing tingling or numbness. Impairment of memory, déjà vu, metallic taste, olfactory or visual hallucinations are other examples of partial seizures. If the patient remains conscious then these are labelled as Simple partial seizures.

Complex Partial Seizures can arise from the Temporal lobe (most common), Frontal, Parietal or Occipital  Lobes. They may  be  preceded by anAura (simple partial seizure) and associated with impairment of consciousness and last less than three minutes. Patients  may  stare ahead and may have semi-purposeful behaviour (automatism) such as lip smacking, chewing, gesturing, repeating words etc.  following  that the patient may remain confused for a few minutes or hours (post ictal), complain of headaches or sleep. He/she usually have no  recollection of the event.

Typical Absence seizures (formerly petit mal): affect mainly children, lasts a few seconds and associated with 3Hz spike and waves discharges  in the EEG (figure 2). The child would suddenly stare ahead and becomes unresponsive with or without eye blinking. The child may have many  attacks a day. There may be a family history.

Tonic seizures: sudden increase in muscle tone of the body associated with impaired consciousness and the patient may fall to the ground.

Tonic-Clonic (formerly grand mal) seizures: Vague prodromal symptoms before the patient lose consciousness. A short tonic phase is then followed by muscle contractions (clonic phase). The seizure last between one and three minutes. Coma is the immediate post ictal state which is gradually replaced by a confusional state. Tongue biting and loss of sphincter tone may happen.

Atonic seizures: sudden loss of muscle tone causing the patient to fall to the ground.

Diagnosis: should be made on clinical grounds. The history and an eye witness’s account are essential.

EEG: supports the diagnosis of epilepsy and help with the classification of seizure type.

Brain imaging: MRI to rule out a structural abnormality.

Treatment: Confirm the diagnosis and try to match treatment to the epilepsy syndrome and seizure type. Sodium valproate remains the drug of choice for primary generalised epilepsy. Carbmazepine and Lamorigine for partial and secondary generalised seizures. 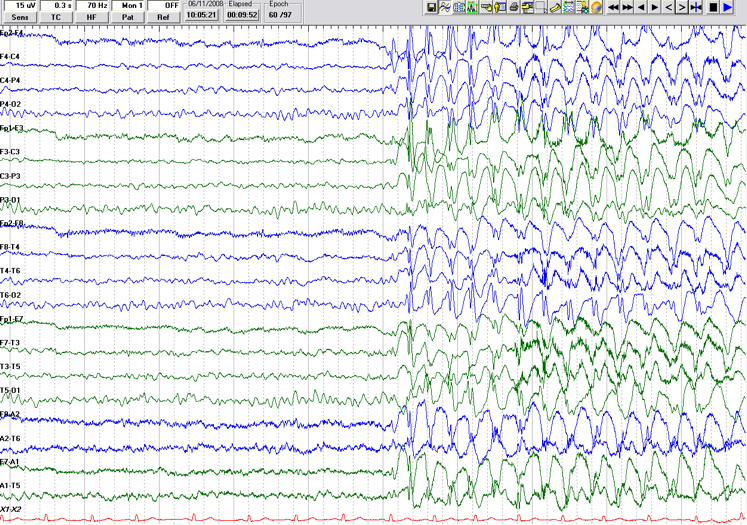